ELL vs. ELU - where to send your beginner Engish questions

A comment was recently left on a recent question; it read:

In this case, I believe the link (to ELL) pointed the OP to the right place to go on the Stack Exchange. However, the question was migrated to ELU.

Maybe this site wants to consider adding a Migration link to ELL? As of right now, there is only a link to ELU: 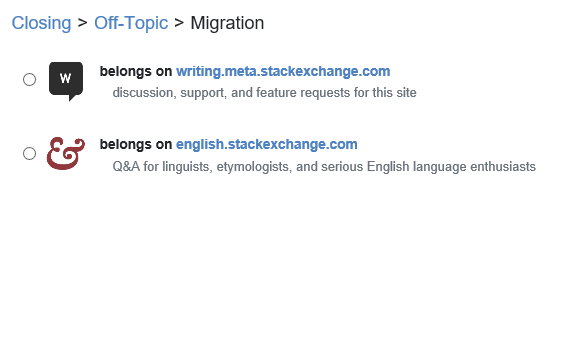 Depending on how many similar questions you get, it might be nice to add:

From a quick look at recent migrated-away question statistics, the vast majority of the questions we get which are migrated away from the site go to English Language & Usage (which, given that that and Writing Meta are the only two migration targets available to the community, isn't terribly surprising). Only a small minority of questions that do get migrated to English Language & Usage are rejected; a migration is rejected if the question is closed on the target site as anything other than a duplicate of an existing question.

There's a small handful of questions which are migrated away from Writing to other sites in the network other than English Language & Usage.

If we start getting a lot of migrations to English Language Learners, it might be reasonable to set up a community migration path for that, but:

So, before we set up such a migration path, the community should make the case that it is needed by showing that we actually would be using it at least semi-regularly. For the time being, that means first putting the question on hold as genuinely off topic here, then having a moderator migrate it away. The community already has all the tools for the former, and a custom flag is by far the easiest way to do the latter.

Also, for clarity's sake: I am not saying that we can't have a community migration path to English Language Learners. I just don't think that the data currently shows any indication that one is really needed. If we do start to migrate a reasonable number of questions to ELL, or if our migration reject rate to English Language & Usage starts to go up, then it may well make very good sense to set up a community migration path to cover that need.

Not the answer you're looking for? Browse other questions tagged discussion migration .

5
Closing off-topic questions and migrate them to WorldBuilding.SE
4
Migration options?

6
Can we get something on the ask question page to discourage grammar questions?
14
Where are the boundaries between Writing, ELU, and ELL?
5
How can we reach out to other SE sites to bring users here?
16
Writing.SE On-Topic summary
5
Let's advertise Writers.SE on other sites, 2016 edition
4
What the heck guys?
18
Migration Path to Worldbuilding SE