Tag for "Nonlinear" or "Branching Narrative"?

This is a request for a catch-all tag for nonlinear, branching narratives, Choose Your Own Adventure® gamebooks, choice fiction (Twine), interactive fiction (text adventures), and the stochastic/procedural storytelling used for visual novels and video game cutscenes.

An existing tag is videogame, but notice none of the above questions made the connection, and I also didn't realize this tag existed until I searched the Tags page for "gamebook" (which doesn't exist). I think videogame conjures something professionally specific, ie: the videogame industry (a look at that tag seems to confirm this). It doesn't suggest the exquisite corpse assemblage aspect which would be more along the lines of "branching" or "nonlinear".

I haven't been able to find many branching narrative resources for writers. Communities are scattered around specific software or niche genre (Otome Japanese romance visual novels), discussion is usually gamer criticism ("FallOut 3's story ruined the game"). A few blogs generalize about branching structure, but never seem to get past an introduction.

Crossover topic with Game Developer, however a Writers-approach is probably more important, and game developers sometimes view narrative as a limitation to player agency, or an unnecessary add-on, so the topic is not always welcome.

Branching Narrative could be used with other tags to narrow the topic: "characters", "structure", "tense", "planning", "tools", etc.

The reasons are already stated in the question, I just want to point out a few things.

A branching storyline doesn't necessarily mean that we are talking about a videogame, because for example gamebooks ("Choose Your Own Adventure"-style books) would deal with this issue, too, and while these could be videogames when using for example a website to play them, such as ChoiceOfGames.com, you could just as well have a printed book like the "Choose Your Own Adventure" books. In this case the tag name game would be more appropriate, but game would probably include other things. Imagine you were supposed to write the backstory or rules for a board- or cardgame. The focus of a game tag would probably be on other aspects than the specific issue of dealing with branching storylines that you as the writer have to deal with.

The alternatives branching and nonlinear strike me as not really telling the user what they are about. With branching-narrative we would have a tag that would tell the reader that it's about issues a writer might have with the narrative without even looking at the tag wiki. Otherwise someone might ask themselves whether these tags are for example used when asking about processes or approaches to writing, such as when asking whether you should work on one piece of writing at a time or on multiple pieces at a time, or multiple slightly different versions of the same book at a time - a nonlinear approach where you are skipping between worlds and having branched drafts that you are working on.

Or people might think that "branching" is about "branching out" to get some new experience in a different field, such as in the question How can I freelance remotely for overseas advertising agencies as a writer? . People could also mistake this to be about version-control and branches used there to distinguish different versions that people are working on.

interactive doesn't really convey the feeling of being about problems you encounter when writing such a multi-branch story. It looks like it could be about interactive tools that help you write your story instead of being an element in the writing problem itself.

I completely agree with the Pro section of the question.

The narrative is independent of the game mechanics and our focus should be on the narrative. Game mechanics and their impact would be better served over on GameDev.SE. The mechanics might play a role when mentioning requirements about your writing, such as when you are basing everything on locations but not knowing how to keep track of what happens where and needing for example tools or software that help you with this issue, but the mechanics shouldn't be the focus of the question.

story-engine might actually be another topic that might be worth a new tag if we have some questions that deal specifically with them. Questions like Resource for generic plot hooks? might profit from being categorized in a special category that deals with engines that are helping you to come up with stuff. Looking at the NaNoGenMo page linked in the question it says for example:

The "novel" is defined however you want. It could be 50,000 repetitions of the word "meow".

This shows that such a generator does not necessarily need a branching storyline. Maybe a generator is used to develop each branch of a multi-branch story, but in such a case I would say it would be a good idea to tag a question with both branching-narrative and story-engine. Maybe this could go together with the granular text category mentioned in the question so that we have a tag that is used for text generation in general, no matter if it's trying to be coherent, translating stuff or just creating more of less random stuff?

A tag that might be important to think about in the context of this question is storyline. The tag assumes one continuous storyline and should therefore get a tag wiki update when we create branching-narrative to say that this is the main difference. Something like:

This tag should be used on questions that deal with a continous storyline, though the timeline could change if you are writing a story that involves timetravel. Contrast this with the tag [branching-narrative], which should be used for questions that deal with multiple possible storylines that depend on the choices of the person interacting with your work. A "choice" in this context could be a conscious choice, a quest-item in the characters inventory, the amount of interactions with certain other characters, ...

The conventional umbrella term appears to be "non-linear narrative" and I therefore propose that we use this term for a tag.

Branching narrative is just one of several kinds of non-linear narrative. For example, reverse chronology, where a non-branching story is told from the end to its beginning, or flashbacks, flashforwards, and threaded narratives –

– are non-linear narrative techniques that do not involve branching. Branching also implies a tree-like increase in storylines, where multiple endings follow from one beginning, while the opposite, merging storylines, are also possible: 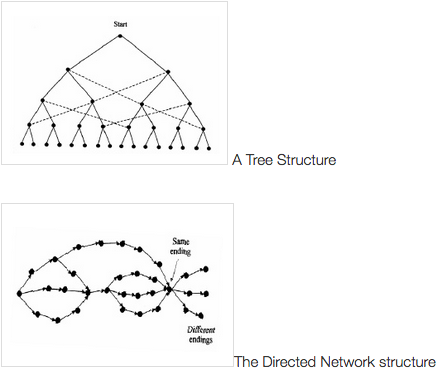 "Non-linear narrative" is the term for keywords on Wikipedia:

"Non-linear narrative" is the preferred term on the internet, with 106,000 hits on Google, and in academic sources, with 3690 hits on Google Scholar, while "branching narrative" returns 42,500 and 637 hits respectively. 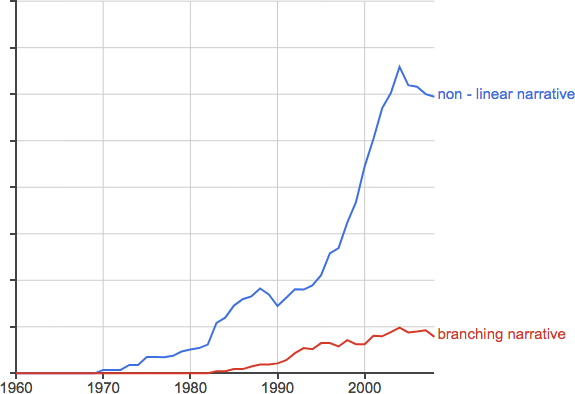 Not the answer you're looking for? Browse other questions tagged feature-request tags .